Facebook ads involve a lot of moving pieces that all need to line up if you want to get a single high-converting ad that’s actually going to drive results.

I’ve worked as a social PPC copywriter (and a content marketer who writes extensively about ads) for the past seven years, so I’ve seen how you need to have a solid strategy, on-point targeting, the right placements and budget, a strong funnel, a landing page, and relevant-right-now creatives to bring it all together. That’s a lot to keep up with, and there’s no silver bullet answer, so I thought it would be helpful to look at some examples of ads that actually worked.

I reached out to my network to talk to people with experience running ad campaigns, including small businesses running campaigns themselves and ad agencies creating ads on behalf of their clients. They delivered, so let’s take a look at eight examples of Facebook ads that worked.

Social Media College, based in Australia, offers high-value social media and digital marketing courses. Their core audience is women business owners who need help with their social and women who want to start a social media business.

To reach that audience, they ran a series of ad campaigns featuring testimonials from women entrepreneurs who’d taken the courses in the past. 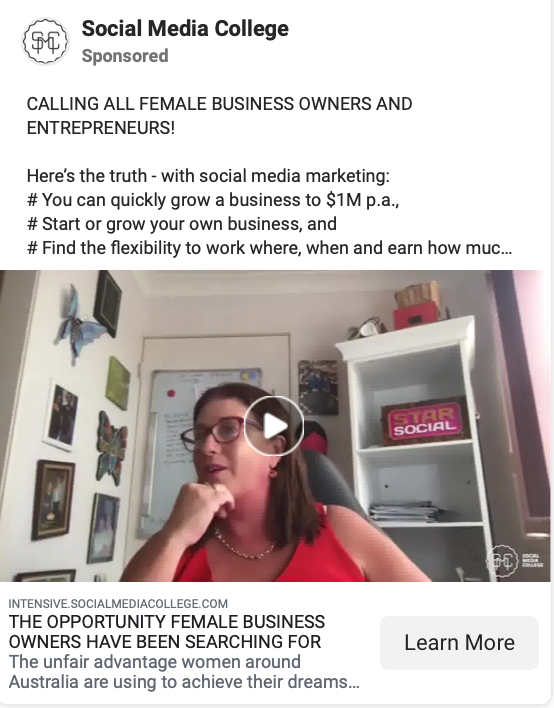 The team explained to me that this was a top-of-funnel ad: they wanted to show their audience that a social media career was The Answer. Clicking on the ad took users to a video sales letter that explained how you can grow a business with social media “without missing a bedtime story.”

Social Media College also used both interest-based targeting and lookalike audiences, before then retargeting users who viewed the landing page after clicking the ad. The next ads in the funnel take users to a landing page where they can set up a phone call with an enrollment specialist.

Breadcrumbs is an innovative contact and lead scoring tool, and they started strong with bright, branded imagery that you see across their main site, main site, and social media.

They promoted a article, with the goal of increasing brand awareness and video views specifically. It featured a video with branded language around the theme of becoming a “superhero” by using “the world’s first B2B super squad.” There was a link to capture interested leads at the end of the copy. 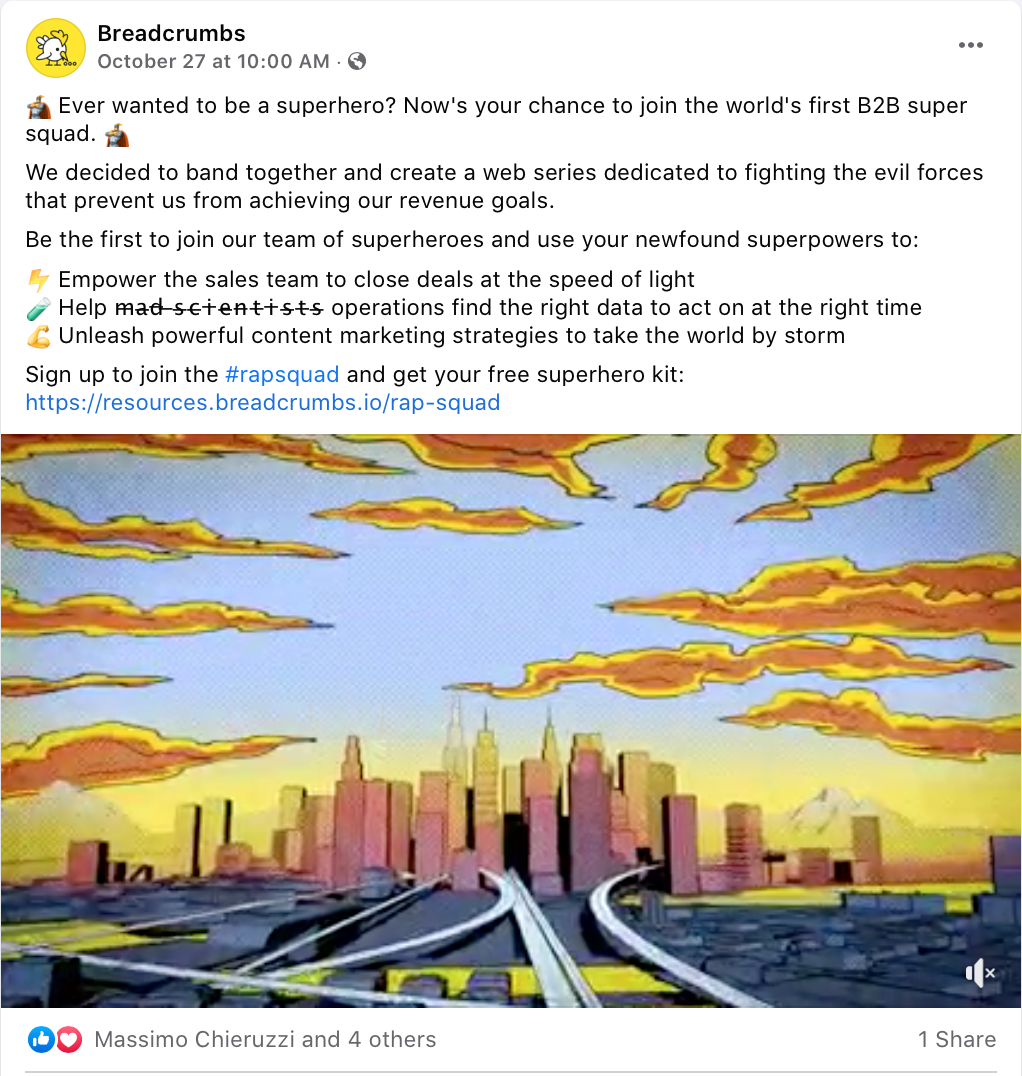 “All in all, our goal was to get eyes on the video, and we were using video views as our main objective and leads second,” explained marketing manager Tory Wegner. When I asked her why she thought it was so effective, she said, “It was pretty unique as far as videos go.”

They saw increased awareness and registrations thanks to the promoted article, and they plan to retarget leads as well as users who watched the video but haven’t yet signed up.

Grow My Ads specializes in Google advertising, but they had plenty of insight to offer when it came to Facebook ads. They provided the following example that they created for a client, which started with a testimonial in the copy. 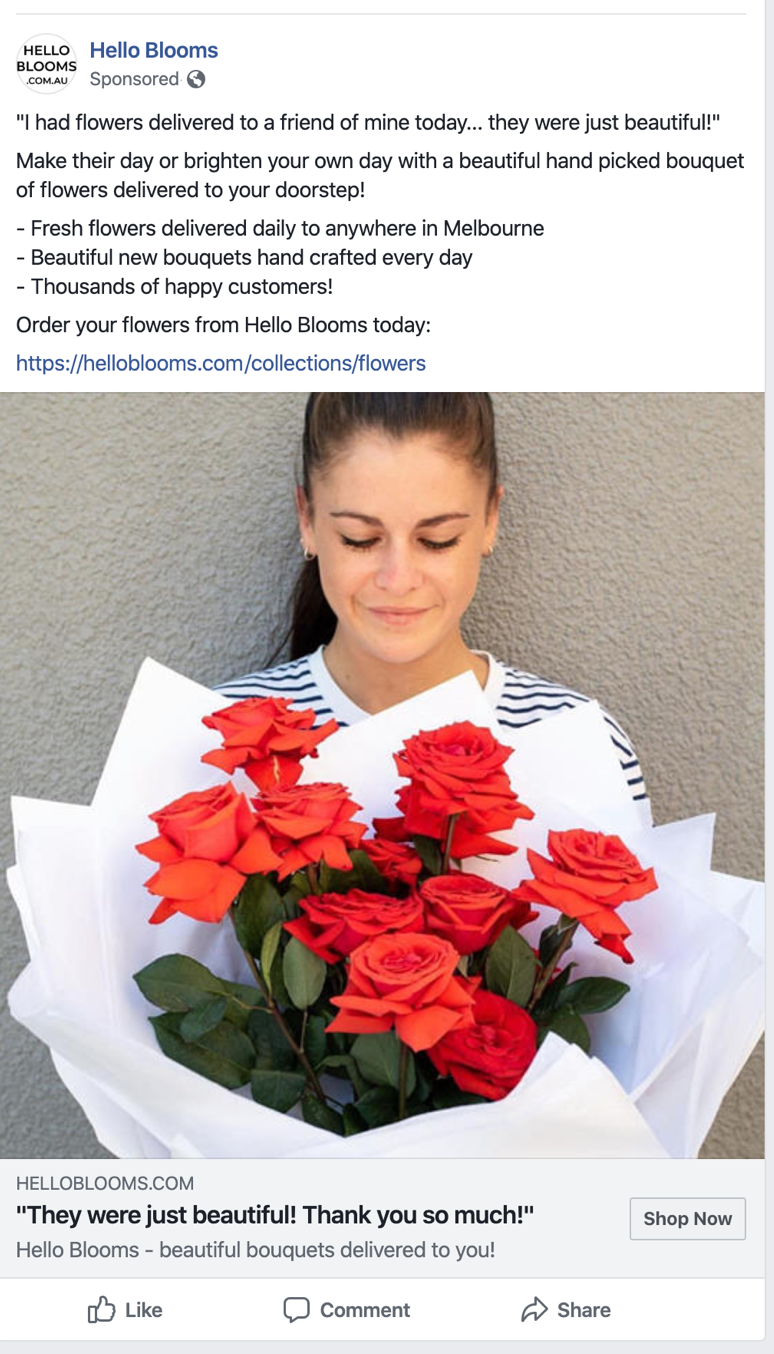 They also used a short but highly effective testimonial in quotes for the ad’s headline at the bottom of the image. “It implies social proof and describes exactly the reaction that a customer wants when they buy flowers,” said Austin.

MyTracker is a mobile app data company that allows app developers to get detailed analytics on their app’s performance. They’re currently working hard to expand to larger audiences on an international scale, and they used a content-focused approach in an ad to help.

The ad includes a video that breaks down how developers can accurately predict their app revenue and LTV right now after recent iOS changes. 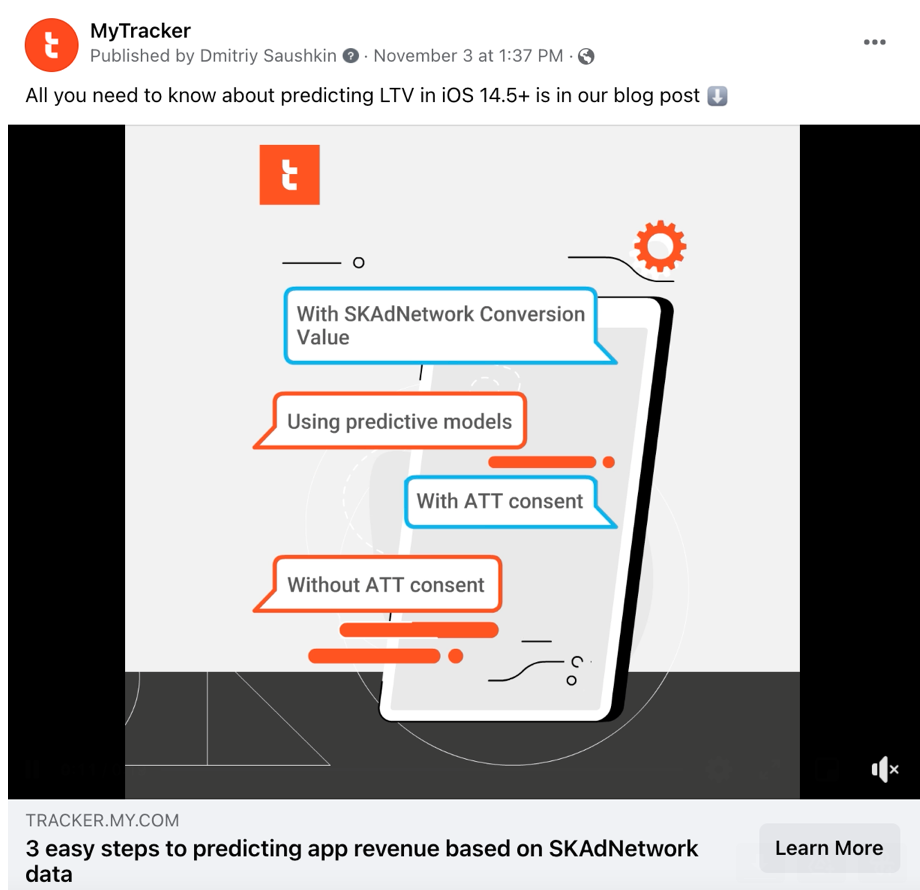 “The results were overwhelming,” said Elizaveta Shutova, MyTracker’s senior product manager. “Especially for the chosen targeting options, which was in the U.S. and Europe. The cost per landing page view was just $0.43, which is 132% lower than average for our account.”

Shutova said that there were three reasons that the ad was as successful as it was.

1. The content directly addressed their customers’ core pain point. “Traditional mobile marketing analytics tools have virtually lost their functionality due to Apple’s new privacy policy,” she said. “That’s why mobile marketers have to find ways to assess the efficiency of ad campaigns. MyTracker provides a solution, and this ad immediately showed that to users.”

2. Facebook values ads with video content due to its high engagement rate, which likely helped this campaign yield a higher click-through rate compared to their previous ads using the image format.

3. Elizaveta said that the text was powerful from a neuromarketing point of view by using two words—”free” and “you”—while also asking questions. “Asking questions is a smart move in the face of Facebook’s algorithm,” she explained.

Sugar and Crumbs is a cake decorating and supplies company in the UK, and they worked with a campaign expert at AdEspresso by Hootsuite to create the winning ad we’re about to look at.

In early 2020, as we all know, plenty of brands had to pivot their business strategies as we entered pandemic lockdowns around the globe. Sugar and Crumbs was no different: their focus had been on suppliers making cakes for weddings or other large gatherings.

But there was an enormous uptick in home baking, so they switched their targeting quickly. This was the ad that they ran. 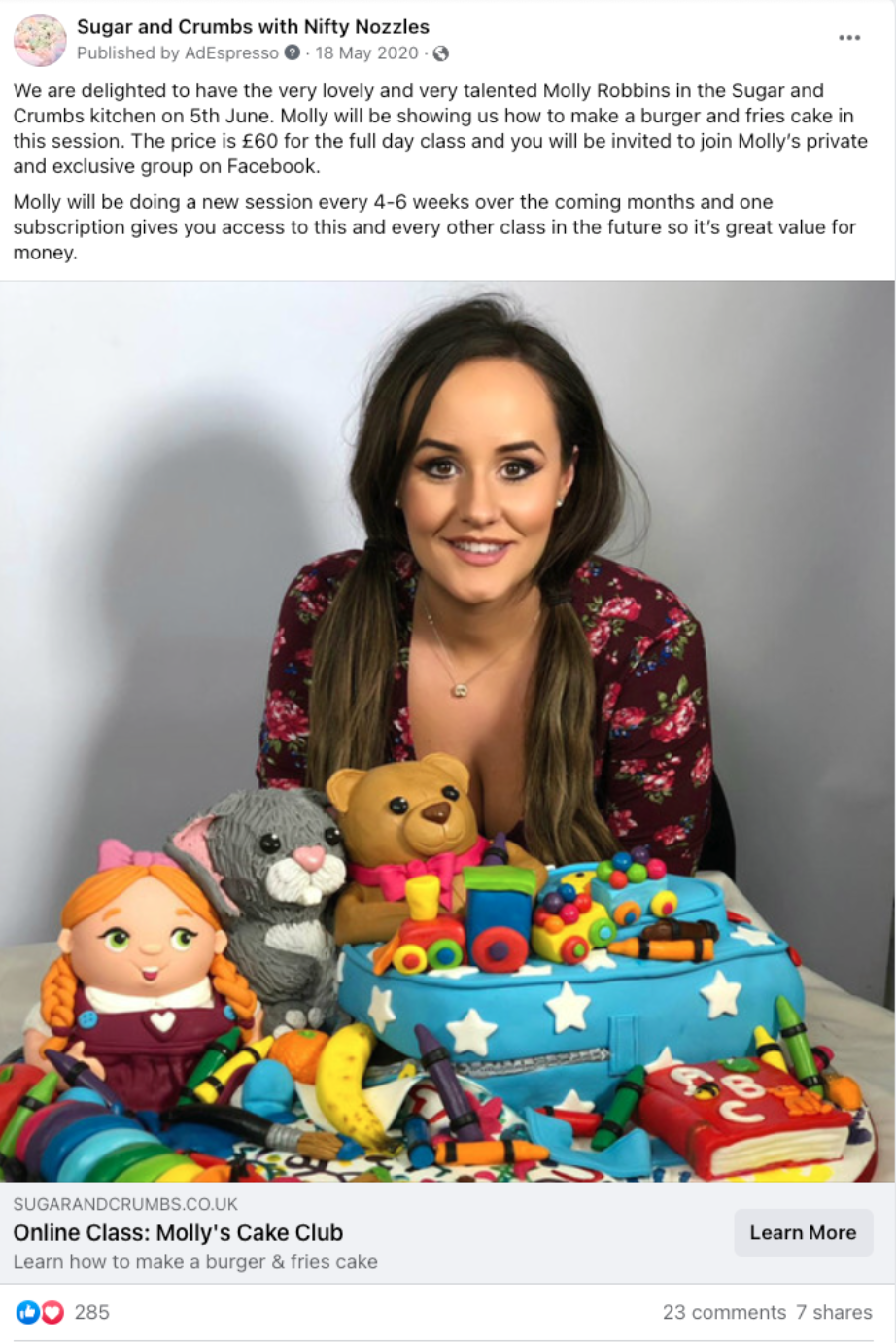 “They launched a series of online classes which were run via Facebook Live in a members-only Facebook group,” Paul Fairbrother, Facebook and Instagram ad specialist at AdEspresso, explained. “The strategy was to advertise the upcoming class, and then once people bought access to the group, they would get the next few classes by that tutor for free.”

The ad received outstanding results, with more than 500 purchases at a 50x return on ad spend (ROAS).

“It’s a case of being in the right place at the right time and acting fast once they spotted a trend,” said Paul. “The ROAS was high because S&C had already built up large audiences for remarketing by running free Facebook Live sessions before the pandemic.”

Real estate advertising can be a completely different ballgame from trying to drive eCommerce sales or SaaS signups. You’re looking to connect with clients who may be more inclined to trust referrals than an ad.

That being said, Florida realtor Jarrod Benson has had success with Facebook ads by focusing on making the process seem accessible and affordable—and by starting a relationship with the customer. It all begins with engagement-focused ads.

In the ad here, he mentions that if you’re paying above a certain amount in rent, it’s time to buy. He makes the process seem simple and has a phone number that people can call, but he encourages people to comment on the article too. 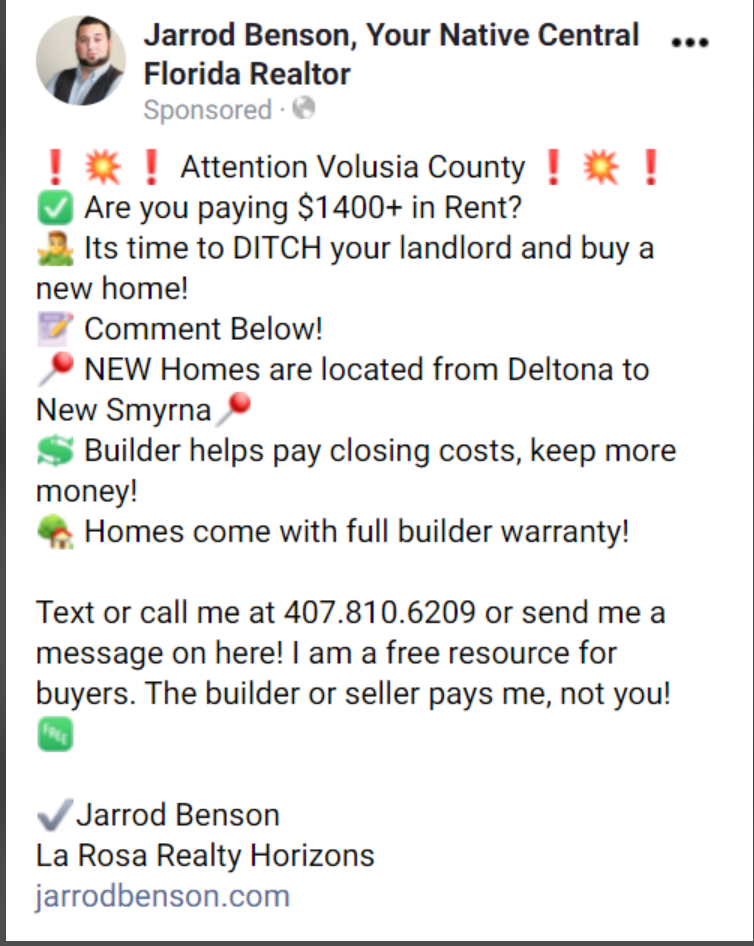 He gives his audience plenty of options for how to get in touch, and they did. He got new likes on his Facebook Page and an actual buyer—for just $100 in ad spend. When you consider how much real estate agents can make off a single sale, that’s an excellent return.

“I like to encourage people to comment or reach out to me to establish a connection,” Jarrod explained. “I’m not just collecting a phone number.” These real interactions served him well on this campaign and others.

Strategyzer offers corporate innovation strategies and tools for businesses, and they hired Facebook ad specialist Sarah Sal to develop innovative ads that would help them attract their clients.

Sarah is well known for long-form storytelling in the ads that she creates, and the ad here is no exception. It’s promoting an online course that teaches brands how to adopt business models and methodologies to be successful. The well-researched ad focuses on a powerful story that shows how much impact a business shift can have (from a real company that many people would recognize). And it wraps up by encouraging readers to learn more in the course.

“It gives people a pre-taste of the value they will get after buying the product. Instead of making bold claims and bleeding the problem, it provides actual value and content. It shows instead of telling,” Sarah explained. “Just because an ad makes a claim, does not mean people will believe it.”

It also doesn’t look like an ad. “Even if our technology doesn’t block ads out automatically, our brains are trained to ignore anything that looks like an ad,” Sarah said. “Under some of my ads, people comment to say they read the whole article before recognizing it as an ad.”

Scissors & Scotch is a men’s luxury grooming company that’s expanding across the U.S., and their whole vibe is Ryan Reynolds-esque with a hefty dose of humor and sarcasm.

The retargeting ad below captures that by telling previous customers they need a haircut—and then calling out the fact that retargeting can be eerily accurate on Facebook ads. 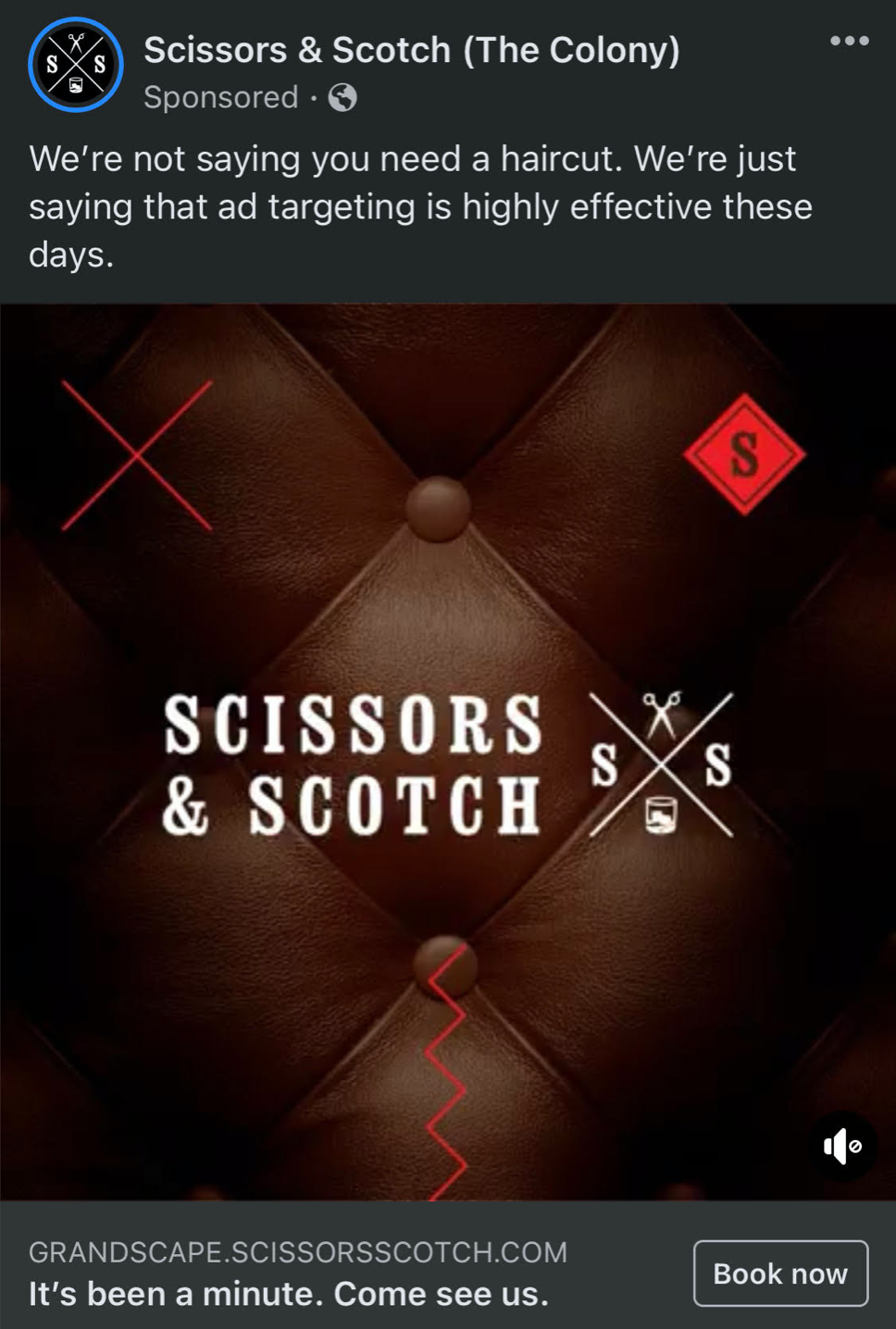 “The strategy behind the ad was to target clients who have not been in for more than 30 days,” said managing director Erik Anderson. “We’re able to segment all of our clients into different audiences based on number of appointments, last time in, member, non-member, and more.”

He continued: “This ad has been super effective because of our sophisticated segmentation of our clientele, but also because it’s cheeky and fits right in with our brand tone/vibe. I think companies that try to not be who they are with their brand voice and messaging have less effective marketing because consumers are way more in tune now with what’s authentic and what isn’t.”

There you have it: eight real examples of Facebook ads that actually worked for the brands that used them. You can see that there’s no single correct way to run an ad or one single strategy that works. Instead, understanding your buyer’s journey, your audience, and your product’s appeal is what matters most.

Focus on those three core things, and run some tests; the rest will fall into place.

I hope that you find the above useful or interesting. You can find similar content on our main site: https://rankmymain site1st.com//main site/