I’ve spent the last 10 years writing about and implementing paid ad strategies for businesses, and almost every single company has focused their advertising on LinkedIn, Facebook, Instagram, and Google.

It makes sense: those platforms have a massive reach and well-established ad platforms. But if your audience is on Twitter, Twitter advertising is well worth looking into. It’s generally cheaper than most other platforms, and it’s a pretty specific audience that’s ready to discover new ideas and new brands.

Twitter ad cost will of course vary based on targeting and the type of ad you select. Based on my experience (and confirmed by other folks in the business), you’ll pay between $0.25 and $0.50 per click for Promoted Ads.

That’s a fraction of the cost of a Google or Facebook ad—and if you do it right, it could mean a significantly higher ROI. But keep in mind that’s just for standard Promoted Ads. Other types of Twitter ads, like Follower Ads or Takeovers, will cost you more.

Twitter offers several different ad types, each with its own targeting options, goals, and features. If you’re not sure where to begin, I’d suggest starting small with Promoted Ads.

Promoted Ads are Twitter’s standard ad option—they generally look like regular Tweets but have a small “promoted” tag at the bottom. These ads are displayed in users’ feeds and can include images, videos, carousels, and moments. 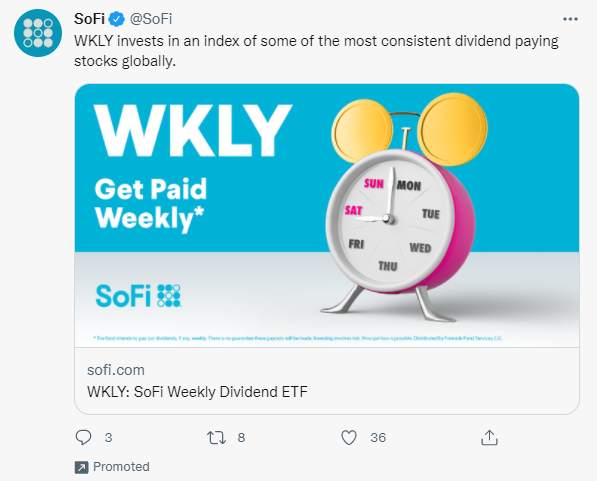 Follower Ads promote your account to a targeted audience with the goal of increasing your follower count. They may look like standard Tweets or Promoted Ads, and you’ll also see them show up in the Who to follow section with a “Promoted” tag. 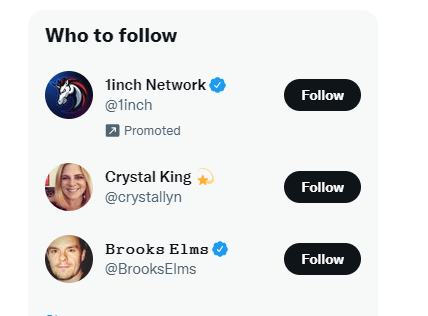 Amplify ads are pre-roll-or mid-roll video ads added to Twitter video content from more than 200 different content partners. You can select partners you don’t want your ad paired with, but other than that, you don’t have a ton of control. Twitter will match you with a partner, and your video ad will play during one of their videos—so you don’t know exactly which video your ad will show up in.

Note: These ads aren’t available for self-serve Twitter advertisers (meaning small brands that run ads on their own).

Twitter Takeover is a premium ad offering that displays at the top of a user’s timeline when they log in and over specific trends. The first ad users see looks just like every other ad—you just get to show yours first. Others, like this Silverado ad, show up in the trending section.

Takeover ads run for 24 hours, and users may see the ad up to three times per day. That makes them ideal for getting attention on product launches, events, and other one-time happenings. They offer massive reach but are also pricey—expect to pay between $2,000 and $6,000 for this option.

Want to reach users at the moment? Twitter Live allows you to promote real-time experiences such as product launches, conferences, or webinars to specific audiences. While you can go live on Twitter at any time, the Twitter Live ad format allows you to increase your reach and drive conversations about your brand.

So you’ve picked your ad type—now what? We’ll leave the creative aspect to you, but here are five ways you make the most of your ads.

Twitter Ad Features are add-on features that can be applied to most (not all!) Twitter ads to engage users. They’re a great way to make your ads stand out a bit more. Here are some examples: 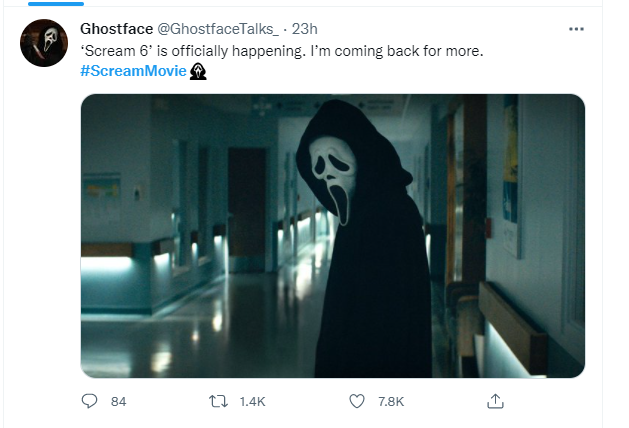 Like most PPC platforms, Twitter Ads can target very specific audiences based on demographics (age, language, location, device, and gender) or audience types (events they’ve attended, conversation topics, who they engage with, or their interests). You can also create lookalike audiences based on people who follow you on Twitter, your email list, or some other custom audience.

The mistake I see many brands make is using just one or two targeting options on Twitter: for example, targeting just by device or location. Platforms like Facebook make it a little easier for you to select all the targeting options, but don’t let the slightly more complex process keep you from targeting more granularly.

The ability to target based on conversation topics is ideal on Twitter, where conversations move quickly. Just be sure you don’t get so granular that no one sees your ad.

Campaign objectives tell Twitter what you want the ad to do. Do you want to reach a specific audience, get website clicks, drive downloads, or increase followers? When you create a new campaign, you’ll see this screen, which will ask you to choose your objective: 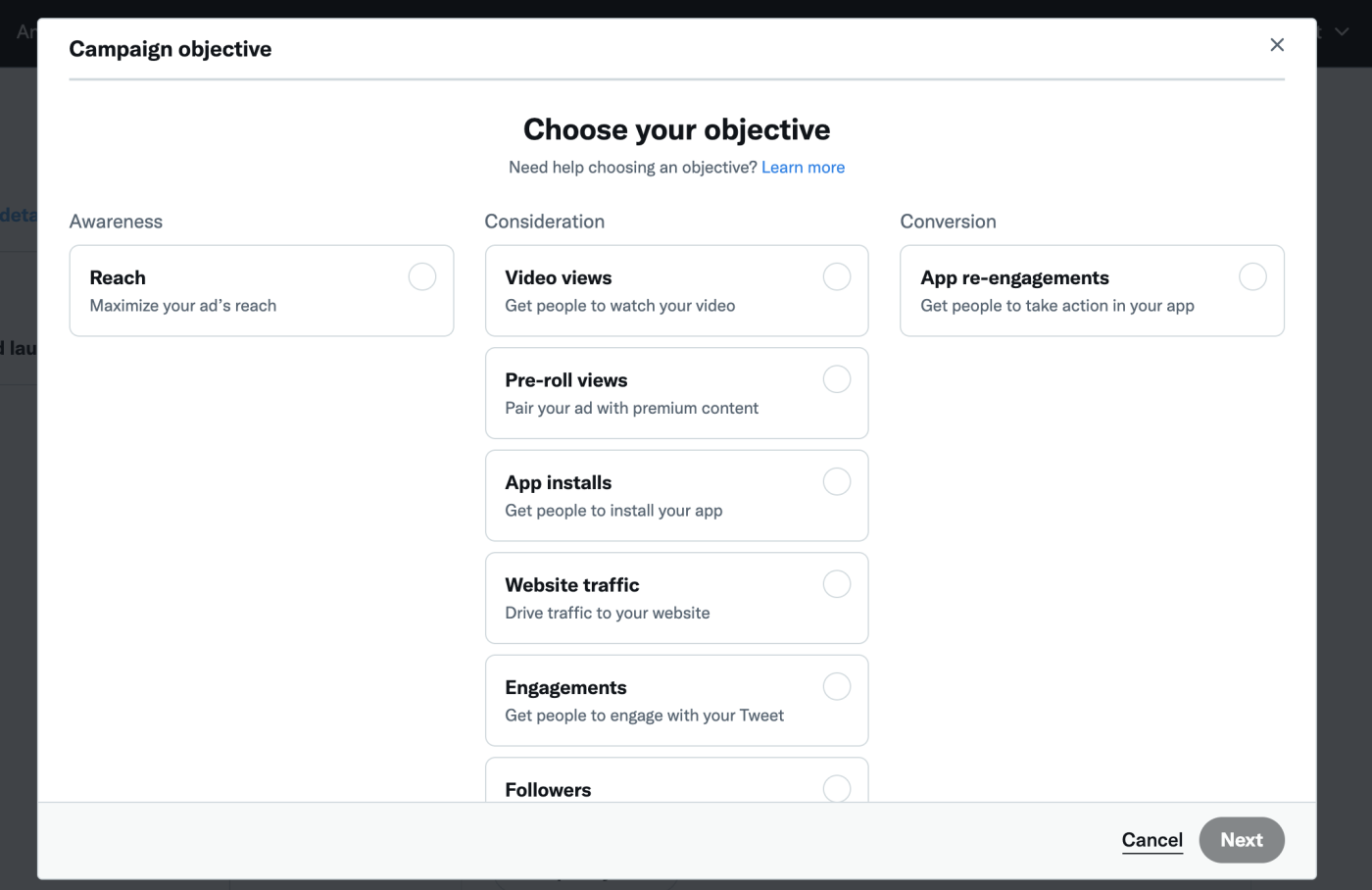 Once you select an objective, Twitter automatically optimizes the ad to reach your goals. Even better: you only pay when users take actions that align with your goal. For example, if your goal is to increase video views, you only pay when a viewer watches your video, not for impressions. (Note: this isn’t true for awareness ads; you’ll pay per 1,000 impressions there.)

So take the time to consider the core goal for your campaign and make sure it aligns with where Twitter users will be in their customer journey with you.

Twitter likes high-engagement articles and rewards you by showing those articles to more people. Ads with high engagement have a higher reach—which means even more engagement.

So to make the most of Promoted Ads (which are the ones you should go after first), promote Tweets that already have a high engagement rate—or create a article similar to your highest engagement Tweets.

Head to Twitter Analytics, then look at Top Tweets and find the ones with the highest engagement rate. 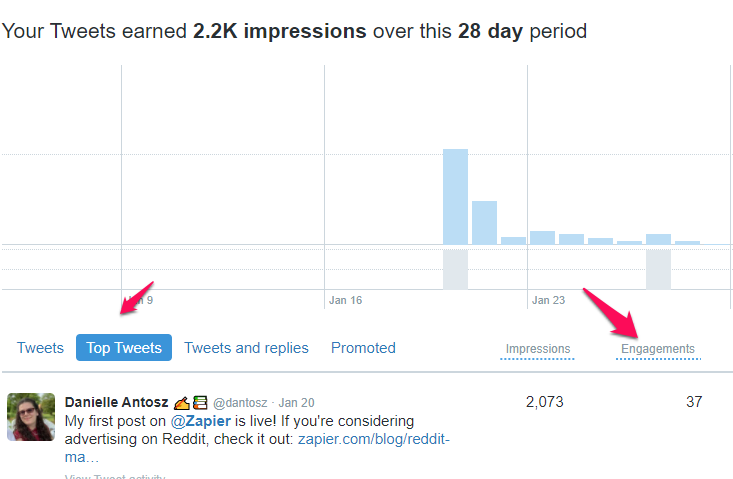 5. Use the keyword exclusion feature

Many organizations focus on what keywords or interests they want to target and forget about excluding things they don’t want to target. The result? They waste ad spend targeting people who aren’t interested in their offering.

While the keyword exclusion feature is also available on platforms like Facebook and Google, it’s especially important on Twitter, where conversations happen in real time. A new meme, TV show, or music album release could quickly throw off your ad targeting.

Here are a few other times exclusions can help:

Keyword exclusion does limit the reach of your ads, so use it carefully and make sure to review it occasionally. If you find your reach is too low, revisit your excluded keywords.

Twitter Ads are an affordable way to drive action, increase brand awareness, and engage your audience—assuming your audience is on Twitter. If your core audience tends to overlap with Twitter’s (well-educated and not too young), then it’s absolutely worth a shot.